Sudan dyes, e.g. Sudan I to IV, Sudan Orange G, Sudan Red B, Sudan Red G, and Sudan Red 7B as well as other dyes like 4-(dimethyl-amino) azobenzene (Butter Yellow) and Para Red are basically synthetically produced red azo dyes. Their degradation products are considered to be carcinogens and teratogens. Due to this fact, the EU does not permit the use of these colours as food additives. However, in some countries, these dyes are still occasionally used in order to intensify the colour of bell pepper and chili powder.

During 2003, the EU-Rapid Alert System (RASFF) issued a series of notifications concerning the presence of Sudan dyes in chili products and other foods such as spices, mixturesof spices, tomato sauces, pastas and sausages. Immediate action was taken on affected products such as withdrawals / recalls and finally destruction in accordance with Decision 2004/92/EC.

In February 2005, Great Britain experienced an extensive Rapid Alert action cycle. Due to the wide spread use of one lot of chili powder contaminated with Sudan I, batches of different products like Worcester sauce, pizzas, pot noodles and seafood sauces were subjected to complete recalls. In order to stop the use of illegal colours in food, the European Commission raised the awareness of the food industry at EU level with respect to their responsibilities under the Food Law (Conclusions of the Standard Committee on the Food Chain and Animal Health Meeting of 10 May 2005).

In August 2005 the European Food Safety Authority (EFSA) published a summary of opinion (The EFSA journal (2005) 263) which reviews the toxicology of a number of dyes illegally present in food in the EU.

Another recent concern is the discovery of the natural colour annatto in foods and spice mixes. Annatto (E 160b) is per?mitted by the EU for use in a variety of foods and beverages but not in spices and spice mixtures. Its main colouring con?stituent is Bixin, with Norbixin being present in smaller amounts. The finding of Bixin is used as a proof for the presence of annatto in a product.

As part of a regular quality assurance program, it is highly recommended to screen products such as spices, spice mixtures, tomato based sauces, gravies and oleoresins etc. for Sudan dyes and other forbidden dyes.

A minimum sample material of 50 grams is required for the analysis.

Our laboratories constantly invest in R&D to develop and validate new analytical methods. We also keep a close eye, on a daily basis, on scientific developments and changes to national and international legislation. Please do not hesitate to our contact: branch office. 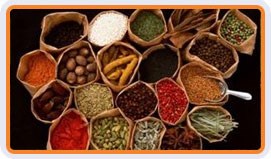